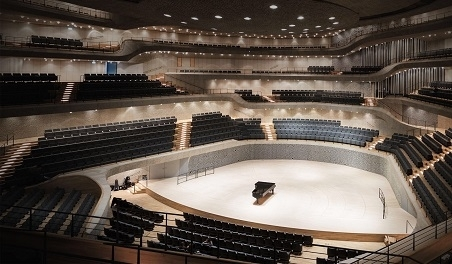 The proscenium of sound-absorbing acoustic design in concert hall

The stage opening of the concert hall plays an important role in the early reflection of the front and middle seats of the pool seat in the hall. The reflection surface formed by the front side wall and the top plate of the proscenium should be designed for the reflected sound in the front middle area of ​​the pool seat, which cannot be replaced by other interfaces in the hall.

Concert halls usually have to take into account the two forms of natural sound and sound reinforcement performance. The sound source is located in two different positions on the stage (natural sound) and the sound bridge on the upper stage (the speaker group of the sound reinforcement system), and the concert hall absorbs sound. The floor railings are usually concave arcs. The concert hall absorbs sound. Therefore, the fence should be designed for diffusion, and the form can adopt convex arc round noodles, triangles, cones, etc.

The ceiling under the seat.

The seats under the stairs are usually far away from the stage. In order to obtain a uniform sound field distribution, under the conditions of natural sound performance, the blossoms should play a role in enhancing the sound intensity of the back seats; when the sound reinforcement is used, the ceiling should use the speaker group The voice smoothly entered the space under the seat.

The back wall of the music venue

The decoration of the back wall of the concert hall should be determined according to the function of the hall and the way of performance. For concert halls and opera houses with natural sound performances, the back wall should be treated with sound reflection and diffusion, and for halls with sound reinforcement systems, sound-absorbing structures can be used, and at the same time, it is necessary to prevent the generation of echoes and the decoration of the speaker group. Music venue speaker group The finish structure must meet the requirements of both sound transmission and aesthetics.

(1) The finish structure must have as large a sound transmission rate as possible, not less than 50%;

(2) The lining horn cloth should be as thin as possible so as not to affect the output of high-frequency sound;

(3) The structure must have sufficient rigidity so as not to cause resonance.

(4) When using wooden grille finishes, the width of the wooden strips should not be greater than 50mm, so as not to block the output of high-frequency sound